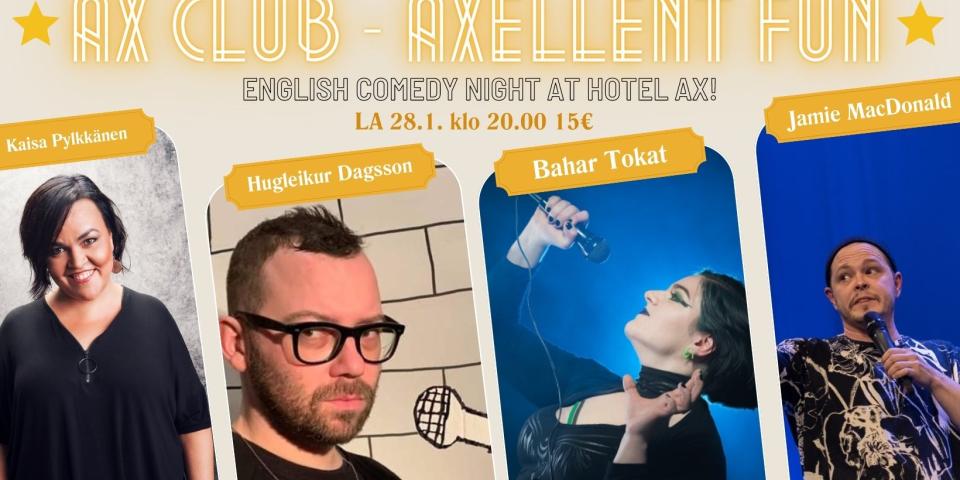 AXellent Fun Stand Up in English!

Hugleikur Dagsson is a cartoonist/comedian from Iceland. He has published many books, written a few plays and released one stand up special in English. He likes cheese, horror and Finland. He is coming to Finland for a tour and we are privileged to have him for his only weekend Club gig!

Jamie MacDonald is a Finnish-Canadian comedian and artist, known for hosting the Punch Up! Resistance & Glitter shows at the Finnish National Theatre as well as Comedy Idiot, a monthly English Comedy club in Kallio. He is also known as the face of The Feminist Comedy Nights, and as the co-host of the Radio Helsinki podcast How Bad Was That with Ali Jahangiri. His first solo show Gender Euphoria ran for sold out audiences, and we are very happy to have Jamie with us on this special night.

If you ever wondered what if Marilyn Manson had a baby with Tinker Bell, well, here's your answer: Bahar Tokat! She started stand up at just 16, and has an endless source of material in the misfit mess that is her life as a Turkish goth in Finland. She is also known for her work as an actor both on stage and screen.

And as your host, Kaisa Pylkkänen, an award-winning Finnish comedian who has toured the world (ok, only 10 countries on 3 continents) with her comedy and has handpicked all the comics at this club. Voted "Comedian of the Year” in 2020 by her peers.

Choose the ticket that suites you the best and come enjoy!